THE HISTORY OF OUTLAW STUDIOS

Outlaw Studios comprises of fourteen artists studios, a workshop, and gallery space, all of which occupy the former electricians quarters of the old Ford Factory.

Cliff Dolliver was the first artist to use this space, establishing an Arts based company, Dolliver Design Limited, (also trading as Dowtcha Puppets) in a 15 sq.m. space in 2002.

At that time the largest of the three spaces on the second floor was a dumping ground for the estate. It held old factory equipment, the Ford's Christmas tree, and a catalogue of detritus from small businesses and enterprises housed there since the Ford Factory closed in the 1980’s. The glazing in the saw tooth roof had been replaced with metal sheeting.  There was no plumbing, electricity or light. A builder used the remainder of the space for storage.

He generously offered the use of any space that was cleared as a sublet on his lease. This resulted in Cliff Dolliver and Ben Jenkins setting up studios. Serge Vanden Berghe and John Adams quickly followed.

Gradually, as the spaces surrounding the Dolliver Design workshop were cleared and renovated, the Outlaw Studios began to take form. The workshop meshed the Arts and Commerce by designing and building theatre sets, puppet shows, street theatre parades, promotional costumes and props, exhibition services and architectural models. It was several years before any plumbing or electricity was installed.
In restoring the glass ceiling and roof, allowing light to fill the space, the full potential of Outlaws was realised.

In 2005, the lease on the western side of the floor became available. More studios, offices and workrooms were soon renovated and were then occupied by artists and other Arts based businesses.

Young artists such as Ben Jenkins, Ronan Lane, Sorcha O’Brien, and many others, have stayed a while at Outlaws, moving on to further education and other prospects. Many remain valuable contacts in our network, which now extends to Rotterdam, Australia, Brighton and London.

After years of sorting and clearing, flooring and partitioning, wiring, scraping, cleaning and painting, the central workshop now easily and regularly transforms into a gallery space, and we have a growing stable of dedicated visual artists using the space.

Outlaw Studios is possible because the rent is charged at the pre-renovated rate. The availability of spaces like this is of huge importance to artists, and to the culture of the city. It is self-funded and independent; the artists using the space are genuine cultural contributors to the arts of Cork, Ireland, and beyond.

While Outlaw Studios is of and for Cork City, it is also part of the family of the Industrial Estate, the wider community, Ireland and Europe.

We look forward to the changes, opportunities and interactions that the future holds for Outlaw Studios.
Posted by ABOUT CLIFF at 1:28 AM No comments: 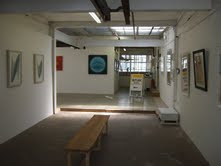